Last year, during the writing of my book, I had a couple of big freak-outs.

The first was when I realized that Cheri Gregory’s ideas, which I had been privy to as I evaluated her messages, might have seeped through my brain and inadvertently into my content. I felt terrible! We both had written about perfectionism, but thankfully we were able to sort it all out in a conversation before my manuscript was due.

The second meltdown came after Carey Scott volunteered to give me feedback on my manuscript as I wrote. We share the same literary agent, Blythe Daniel (our beloved hero!), so I was thrilled to have Carey’s thoughts. After reading the first couple of chapters, though, Carey emailed me to withdraw from the project, because she was afraid her new book, Untangled, had too much overlap with mine. Quelle horreur! Again, I was grateful to be able to have a discussion with my new friend to work through the tangle. 🙂

In the process of working through these issues, the three of us decided that something beautiful had happened.

The complications didn’t seem wonderful at first, but then we began to dream about what it would look like for the three of us to collaborate instead of compete. At first glance, our books– The Cure for a Perfect Life by Cheri and Kathi Lipp, Untangled by Carey, and Breaking Up with Perfect by Moi– seemed like competitors in the market. In our conversations, we became each others’ biggest fans, so it became appealing to share each other’s content with our “tribe”.

We decided a perfectionist’s worst time of year is the holidays which helped us establish a time frame. Because we wanted to invite some others into the mix, we also wanted to keep the project simple, so we chose a blog tour format. Glynnis Whitwer and Kathi Lipp agreed to join forces with us.

Each of us has contributed, but here’s where I’ve got to tell you that Cheri has been our fearless leader and has created something far beyond our wildest dreams including graphics, a site, and video. Blog tours are set up all different ways, but you can take a look at click here to see our Wrapped in Grace blog tour site. 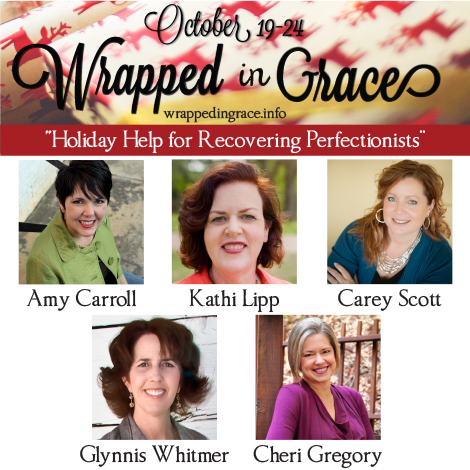 Here’s the main thing I want to communicate to you this week. Scripture tells us that we have shouldn’t be proprietary over our ministries. There’s really nothing truly new.

[Tweet “”…What has been done will be done again; there is nothing new under the sun.” (Ecclesiastes 1:9)”]

I have experienced the blessing of collaboration with this blog tour, and a by-product is that my platform had huge growth in just one day. Do you have speakers or writers around you who are tackling the same topic? Don’t worry! You have a unique voice that’s needed as much as theirs. I encourage you to tap into the power of collaboration instead of “guarding” your own material.