Even though Ben Saunders, polar explorer, attained a goal that no human had ever attained, he still struggles with disappointment. Why? Because he needed, asked for, and accepted help.

For a total of 105 days, Ben and his partner had pursued their goal, walking 1800 miles from the coast of Antarctica to the South Pole and back. They were traveling in some of the harshest conditions on earth. There was 24 hour a day sunlight with no dark to mark their sleep. The sledges they hauled were over 400 pounds each. There were almost constant white-out conditions that Ben described as “like being inside a ping pong ball,” and the temperatures dipped to -70 degrees wind chill.

I listened to Ben’s story on the TED Radio Hour through my earbuds as I walked. I was awed, and I identified.

I’m not an athlete, so I couldn’t identify with him on that level.

I haven’t had an epic adventure like Ben, so I couldn’t identify with him on that level.

This southern girl’s warm blood would surely never survive that kind of cold, so I couldn’t identify with him on that level at all!

When Ben got to the end of his story, however, I suddenly had a flash of understanding. We’re not so different.

When Ben and his travel partner were almost to their destination, a storm came that slowed down their progress to the point that they ran out of food. Suddenly, they had a decision to make. Should they press ahead and face the potential of starvation or ask for help?

Ben really, really didn’t want to ask for help because he had patterned his trip after the Scott expedition from the early 1900s. The expedition goal was to do it “unassisted” meaning that they’d only survive on the food they brought or could retrieve that they had stashed along the way. They were miles away from their nearest outpost, and Ben knew that they had to call for resupply. After all, the Scott expedition hadn’t gained the record because the whole team died on the return from the South Pole. They didn’t want to meet the same fate.

So Ben and his partner used their cell phones to call for help, and a plane brought food–sumptuous food that tasted like the best meal they had ever eaten! They finished their journey and today hold the record for the longest-human powered polar journey in history.

It was when Ben was explaining that needing to ask for help still bugs him that I started to identify deeply with him. He said, “It’s something my ego is still struggling with. It was the biggest dream I’ve ever had, and it was so nearly perfect.”

I have that mentality too. I have thoughts like It only counts if I do it by myself. Or People will think I’m weak if I ask for help. Or Doing it perfectly means doing it alone.

I saw that attitude in myself even this week. I chose to go to a doctor’s appointment alone where there was the possibility of bad news. When I told a friend that I went alone, she said, “Why didn’t you ask me to go with you?!”

Thankfully, I had good news from the doctor, but I had to think about her question. I didn’t like the answer. I didn’t ask her because I didn’t want to be a bother. (My perception, not hers) Because I thought I should be able to handle it myself.

How silly of me to have such a great friend and not ask for her help!

At the end of the interview, Ben ended with this quote:

“Happiness is not a finish line. And if we can’t feel content on our journeys amidst the mess and the striving that we all inhabit– the loops, the half-finished to do lists, the could-do-better-next-time– then we might never feel it.” 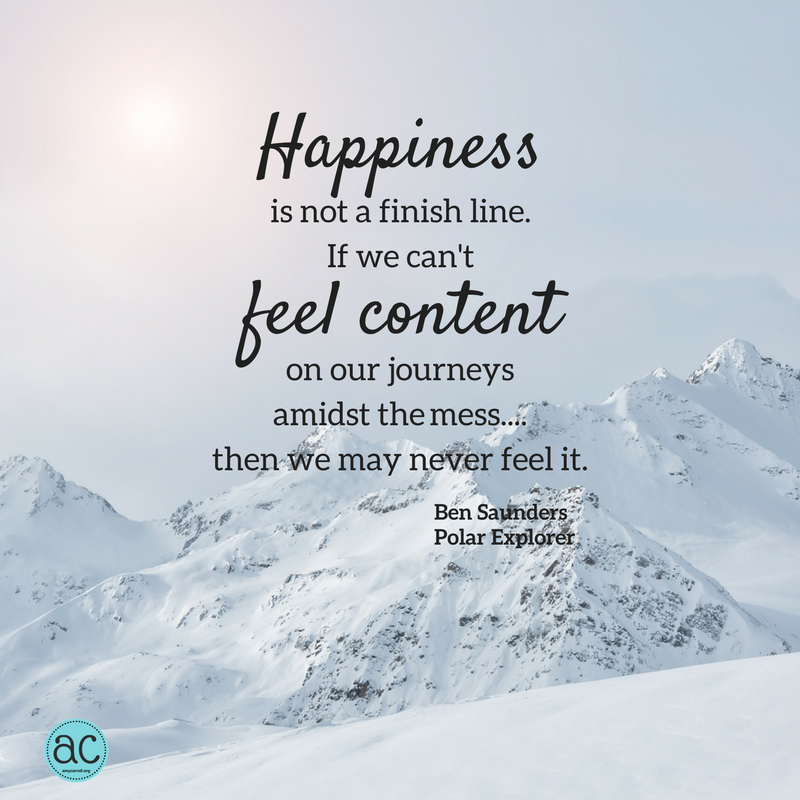 Happiness and help. They’re not mutually exclusive. Not only can we have happiness AND help, I’m coming to believe that we’re happier with help. As I said in Breaking Up with Perfect,

“There is truly a time and a need in our souls for giving, but there’s also an often-neglected but necessary time for receiving. Sharing is a concept that implies both giving and receiving. Giving is the mark of charity, and charity is a virtue; however, always giving while never receiving is a lonely, one-sided deal. In contrast, giving and receiving in season creates community.” (p. 112 Breaking Up with Perfect)

To be connected with others in community and friendship brings happiness. To have this happiness, sometimes we need to be ready to ask for and receive help. I’m not ready for an expedition to the South Pole, but I’m ready for help and greater happiness! 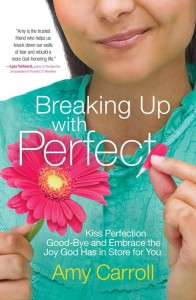 If you’re like me and have a hard time asking for help, Breaking Up with Perfect might be just the book for your summer reading. Click here to see where it can be purchased, and then enjoy the free Online Book Study right here on the website!