To get ready for my breakout session at She Speaks this year, I’ve been asking speaker friends like you to share your creative ideas for adding value to your events. It’s been great to get your feedback!

Last week I suddenly realized that I hadn’t tapped an important group for the information I was seeking–the event planners themselves. I figured it would be valuable to hear what had been important to them instead of just shooting in the dark for what might be important to them.

Duh! The responses I got were so enlightening!

In reading the lists they sent me, though, I realized that I’ve probably been one of the speakers that tends to drive event planners around the bend. I’ve never meant to be the vehicle to crazy-ville, but I probably have been. I realized that I do really well on some points but that in my heart’s desire to avoid being the diva speaker, I actually haven’t given them enough information.

When I arrived to one particular event, I realized that I needed a couple of things. I needed the wireless internet passcode, and I really needed the stage rearranged. It was set up with one of those humungous podiums in the middle and musician’s equipment close to it on both sides.

I had to ask for the passcode since I needed it for the book table, so the event planner scrambled around asking about a dozen people before she found it.

By that time, I felt so bad that I didn’t want to bother her with the stage layout, so I didn’t mention it. That seemed like the right thing to do until an attendee afterwards said, “I felt so sorry for you up there. You looked so STUCK!” Oh, dear. I thought I hid it well and compensated, but the truth was that I felt so stuck!! I like to move around and hate to stand behind a podium, so I had been completely miserable while I delivered my message. Evidently, it showed. 🙁

One of the event planners listed both of those things as details she wants to know ahead of time, so I’ve developed a new tool to share with you. Click on the image below to see my new “Details for Amy” doc. 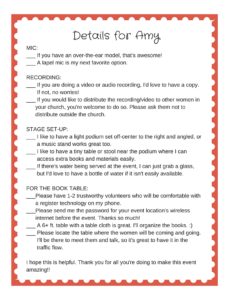 I don’t want to lead with my “list of demands”, so I’ll send this as a follow-up to event planners after we’ve talked personally. I want to first load her up with my heart for service and warm-fuzzies so that she understands this is to be a help and to make the day of the event as smooth as possible. (You’ll also notice that I worked to make it look cute, warm and a little fun. Graphic design is a beautiful communicator.)

Feel free to make your own version of this doc if you think it would be helpful to you!

This will be my last blog post until August. July is crazy-busy with She Speaks prep, so it’s a non-blogging month.

Would you help me to a make a decision by giving your honest feedback? I’m thinking about taking my “Added Value:Giving Your Events More Than Just Enough” as a webinar in the fall. Would that be a topic that would interest you? Would you be willing to make a small investment in your ministry to be part of it? Be honest–I promise you won’t hurt my feelings!