There’s a book proposal collecting dust on my self. It was never published.

We’re all aging. (Here’s where we all laugh with a little hint of hysteria.)

Not only am I aging, but I just hit a significant marker, the half-century mark. I’m telling you the truth when I tell you that I’m not feeling anything but excitement. I wasn’t angst-y over this birthday like I was about 30 and 40. This one feels like a VICTORY to me! In response to a much-loved younger friend who teased me on Facebook that surely I was about to turn 30, I put the laughing-until-you-cry emoji and said, “Wouldn’t give up my years of experience for anything. I earned them!” I really feel that way.

But I am feeling something else too. I’m feeling others’ perceptions of me shifting. I was never hip, but I used to be young! Now I’m neither, and I know everybody else knows it too–primarily by the number of times I get called “m’am” here in the south.

We live in a youth-driven culture, and being of a certain age means a growing marginalization. This is the part that stings, and I don’t like it.

That subtle marginalization, not my age, is what has had me feeling snippy for the last month or so, but God has been challenging me and giving me a mindset-shift in the last few days.

I’ve listened to two sermons in the last two weeks that God has used to challenge me. The first one is from my friend Amanda, who shared at her church about Me-Ism, a self-centered version of Christianity. I didn’t want to see myself in that message, but I sure did.

The second sermon that I listened to today was by my son’s pastor, Michael Clary, at Christ the King Church in Cincinnati. He’s doing a series on Ecclesiastes that’s rocking my world. At the end of his exposition, he shared a quote from Count Nikolaus von Zinzendorf who said, “Preach the Gospel. Die forgotten.” Do you feel the quake under your feet too? 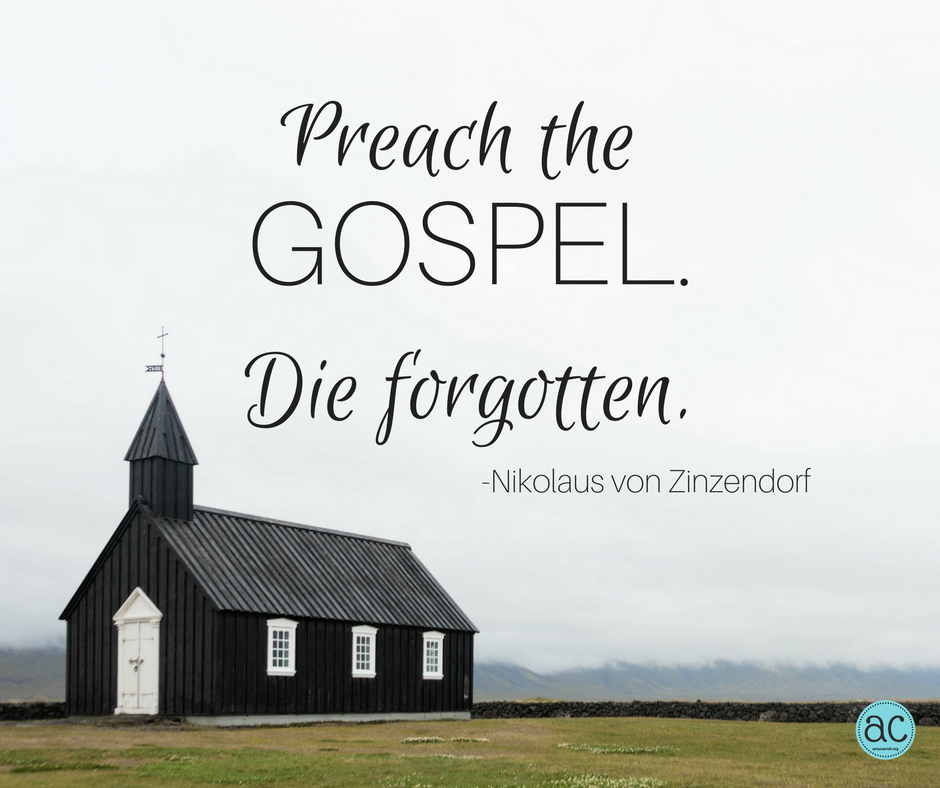 I understand that we’re all made in God’s image and precious to Him, but God used these two messages to show me that I’ve become too precious to myself. My image, my reputation, my ministry and the way others perceive me have become overly important to me (again).

The reason I’ve been struggling with this shift in perception because of my age (which I believe is real, not just my overactive imagination) is that I have slipped into an over-sized belief in my own importance. Do you hear echoes of Sharon’s post from last week?

Surprisingly, that realization and the repentance that followed feels like peace, not pain.

Jesus girls… my friends… God loves us dearly, but we’re to love Him exclusively. When we do, others’ perceptions of us–whether based on status, degrees, age, race, whatever– become insignificant. Let’s heed the call to action, “Preach the gospel” in whatever way God is showing us. For me, I think it’s going to look like empowering the next generation to lead instead of doing so much leading myself. It’s going to be stepping out of some spotlights to make a space for the next voice God wants to use. If I do those things right, it will be a victory not a loss.

And then let’s embrace “Die forgotten.” Not because we don’t matter but because it’s eternal life that really does matter.

Let’s step out of Me-Ism squarely back into Theism, laser-focused on God, where we’ve always belonged.

It’s a significant birthday that’s led me to a closer look personally. Maybe in your life it’s been something else. I want to share thoughts about aging here because these aren’t things I’ve ever had older women share with me. Maybe it’s true that books on aging won’t sell, because women sure don’t talk about it!

Younger women, soak it in a little, and I’d love to hear your thoughts. Older women, you’ve walked this road before me, and I want to know what you already know. Please share your experiences!

I always share with you what’s fresh on my heart, and this is it. For the next few weeks, I’m going to process here and maybe share some of that old book proposal. Let’s share as a community and grow better as we grow older!

Congratulations to the winners of the Giveaways!

Linda Chandler is the winner of Doing Busy Better by Glynnis Whitwer. Linda Gray, Julie Cordry and Betty Jo Nelson are the winners of Free of Me by Sharon Hodde Miller.

I’ve emailed each of you and will forward your mailing address to the author’s team. Enjoy!