Years ago, my friend Christie, a campus ministry staffer, shared her vision for discipleship with me. It’s a vision that has grabbed hold of my heart and embedded itself.

She told me,”It’s my desire to develop three generations of believers in my lifetime. Women who not only love Jesus but who are mature enough to win and teach another generation.”

That vision of spiritual generations captured me on so many levels. Although it’s my desire to share my faith, it’s so much easier to do it on a missions trip or in my church. I often fall far short in my neighborhood or in Target or at school meetings.

I also know that as an American church, we generally do a poor job of challenging Christians to grow to maturity and multiply. We have a Sunday morning Christian mentality that keeps us in an extended infant stage.

I saw a very different model in the church in India. These beautiful women represent four spiritual generations. 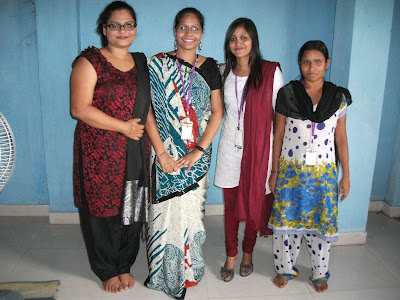 (From left to right) Rita led Babita to the Lord as a teenager. Rita and her husband Bobby had started a youth club in the slum area where the school is, but they had decided to end it because of low attendence. The next week, Babita knocked on the door of their home with her brothers trailing behind.

“Why aren’t we having youth club?” she demanded. Rita said, “We didn’t have enough kids coming, so we cancelled it.” “Well, I’m here!” Babita declared.

That’s where it started. Rita is the principal of the school,and now Babita is her vice-principal. Each woman is brilliant and both challenged me spiritually.

Babita led Merry to the Lord. Merry now teaches at the preschool, interprets, speaks on missions trips and is one of the most annointed praise and worship leaders I’ve met. Merry in turn led Jaya to the Lord and is sharing her life.

Seeing four spiritual generations is such close proximity is a challenge to me to prayerfully and intentially begin to build generations of mature women who love Jesus.

Are you part of a lineage of spirtual generations? I’d love to hear about it.