This weekend I’ll lead a retreat where I’ll deliver messages that are fresh in my heart. Each session still makes my heart pound. They springboard from my book Breaking Up with Perfect, which is still part of the core of me. However, because the messages are over two years old, I need to make sure my messages are fresh for my new audience.

When I have messages with a little age on them, I don’t automatically toss them, but I need to dig in deep to give them a second look. I need to ask questions like:

Does this message still “fire me up” when I think about giving it?

Over the years, I’ve had a few messages for which I’ve lost my passion. That’s not necessarily a bad thing. In fact, it’s often an indicator of growth and change. We shouldn’t deliver any message that has lost its fire, though, so a stale message should either be retired or refreshed. 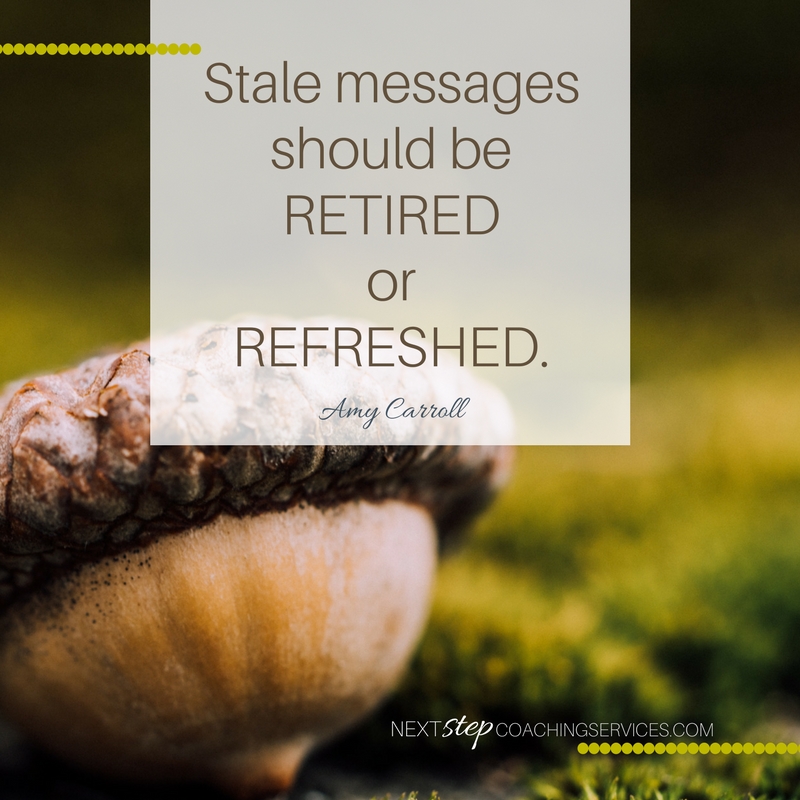 Does this message contain any stories or examples that are outdated?

Part of one of my retreat messages was out of date. I had an ending story based on a series of tweets that Russel Wilson tweeted following one of the most devastating last-minute Super Bowl fails that a quarterback may have ever experienced.

The first time I gave this message, the story was new and fresh. I’m not much of a football fan, but even I followed this story through the news because of the strong human interest element. However, memories of this story have faded. I needed a new ending, and I found a new one from my trip to India last year that works perfectly.

Does it all still work and flow?

I always go through my messages to tweak before I re-deliver them, and I’m amazed at how my view of that message may change. Sometimes rearranging a section solves the problem, and sometimes I think of a better way to say something. For example, in one message I talked about the things we turn to in the midst of crisis instead of running to Jesus. Even though the message was almost a decade old, I thought of new categories to express this idea.  Now I talk about how we:

These fresh categories make this section much more memorable than the more general ways I used to describe these “run away” methods in the previous version of my message.

In the coming weeks, I’ll give you ways to make old messages new again. Let’s all commit to making each of our messages fresh and vibrant!