Have you ever caught yourself saying or thinking things like this?

The news stresses me out too much. I’m not going to watch it anymore.

I can’t think about that problem. It’s too big for me, and I’ve got enough of my own stuff to handle.

Being close to people always ends in pain. I’d rather be alone.

I’ll go ahead and confess that I’ve had each one of those thoughts at one time or another.

None of us likes to hurt or feel pain, but numbing out has become an American obsession. It’s reflected in shelves full of pain relievers, the way we shelter our kids from adversity, and how quickly we turn to entertainment to dodge or dull our pain. There are times when all those choices may be appropriate, but we’re a people (I’m person) who too often chooses numbness over pain.

Pain has a purpose.

In his book Where is God When It Hurts?, Philip Yancey uses the physical disease leprosy to show us that pain can be a gift. People with leprosy lose feeling in their extremities. Their hands, feet, nose, ears and eyes become numb. The tissue damage that’s symptomatic of leprosy isn’t caused directly by the disease. Instead, tissue damage happens because there’s no feeling to let a person know that they’re damaging themselves. For example, one boy with leprosy lost a finger because of turning a key in a sticky lock. When the key wouldn’t turn, he just kept pushing, not realizing that the metal was lacerating his skin. Pain would have kept the boy from injuring his finger beyond repair.

Other physical diseases also prohibit pain, and Yancey says, “Insensitivity to pain dooms such people to lives of constant peril.”

Emotional pain is the same. It’s an indicator that’s something’s wrong or that something has been lost. Although it’s not pleasant and is sometimes downright devastating, pain lets us know that losses and evils like death, divorce, financial ruin, racism, wandering children and sexism are not part of God’s original plan. These things, and many others, are the problems of our broken world.

Pain points to our problem. 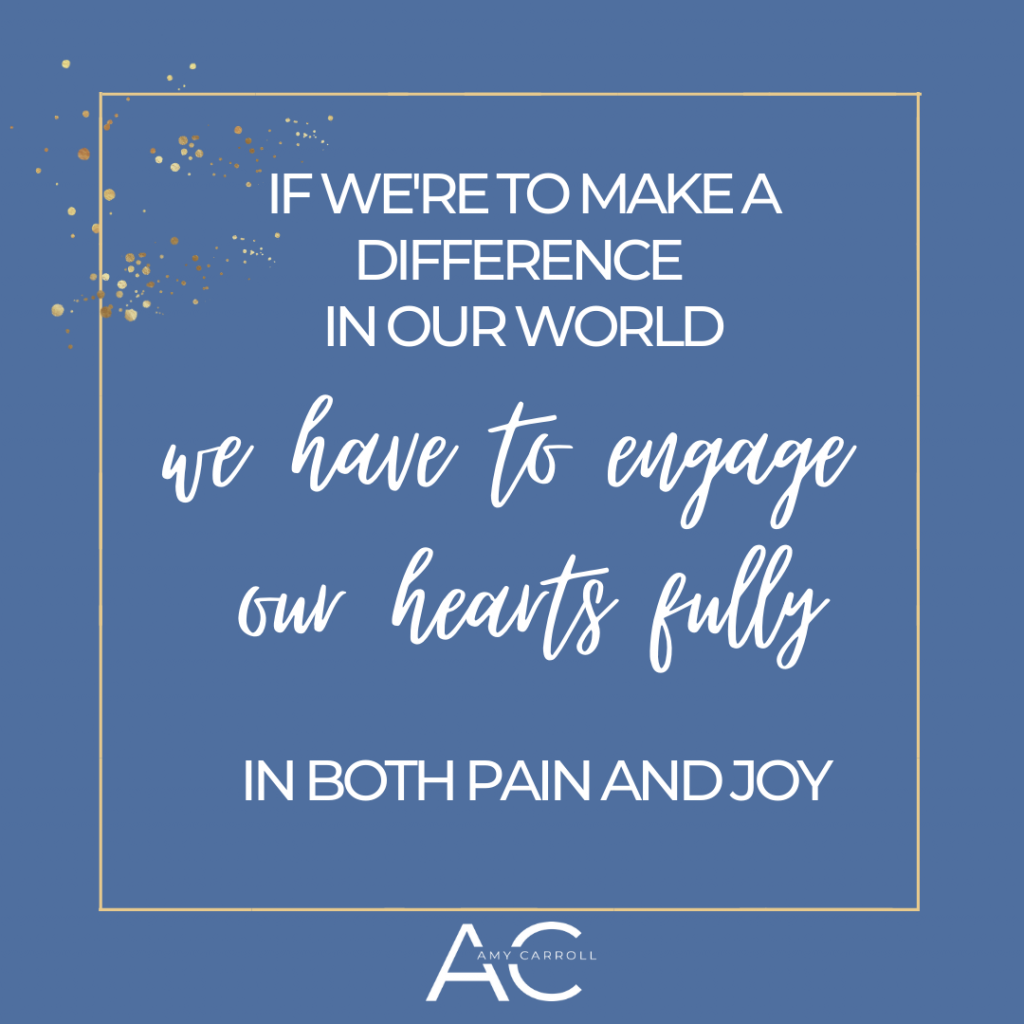 When we turn away from pain, blocking it complete from our lives, we actually miss out. Tender hearts feel pain by definition. Numbed out hearts don’t feel, so they can’t:

Numbing may seem like a solution, but it only works temporarily and it brings greater consequences down the line. One is the absence of joy. Jerry Sittser, in his exquisite book A Grace Disguised: How the Soul Grows Through Loss, tells the excruciating story of the year after the loss of his wife, mother, and child in a crash caused by a drunk driver. At the end of the book, he says,”Yet the grief I feel is sweet as well as bitter. I still have a sorrowful soul; yet I wake up every morning joyful, eager for what the new day will bring. Never have I felt as much pain as I have in the last three years; yet never have I experienced as much pleasure in simply being alive and living an ordinary life. Never have I felt so broken; yet never have I been so whole…. What I once considered mutually exclusive– sorrow and joy, pain and pleasure, death and life– have become parts of a greater whole. My soul has been stretched.”

If we’re to make a difference in our world, we have to engage our hearts fully in both pain and joy, so that we can connect with the people we want to help.

In the series that I’m doing to develop tender hearts and strong voices, you’ve heard the four steps.

In my Christian circles, I believe feelings have gotten a bad rap. Yes, it’s true that “The heart is deceitful above all things and beyond cure.” (Jeremiah 17:9) But it’s equally true that God created us with emotions–the whole range including pain– that are meant to be gifts.

In the “feel” part of the series, we’ll talk about how to leverage emotions rather than being led by them. Next week I’ll write about God’s emotions, so please pray for me as I study!

How about you? How do you process both the gift and curse of your feelings?

Note: I don’t want to leave those adrift who are currently in deep pain or feeling like I’ve minimized your suffering here. In the year after my friend Linda died from breast cancer, the two books I quoted in the post, Where Is God When It Hurts? and A Grace Disguised were a life-line to me in my grief. They are my most highly recommended and most often given when people I love are in pain. Yancey’s book is more of a theological textbook, though it’s easy to read. Sittser’s book is a first-hand account. It looks unflinchingly at grief, but it’s full of hope even though it’s not a bit sugar-coated. Both were exactly what my heart needed –truth and understanding– as I grieved my friend.