Last weekend I was part of a fabulous conference called Women Get Real in Cheshire, CT. It was wonderful in so many ways– local women from lots of denominations attended, the atmosphere was warm and beautiful, and there was excitement and buzz in the air.

My favorite part will probably surprise you. I was the only “professional speaker”. Let me quickly define. The other speakers were extremely effective and very professional, but they were local women who I’m guessing were volunteers. I can’t begin to tell you how delightful it was for me to do an event with other speakers and to hear their stories and teachings. Each of them spoke on an area of struggle for women with which they had personal experience, and all three had obvious God-given gifting as speakers. 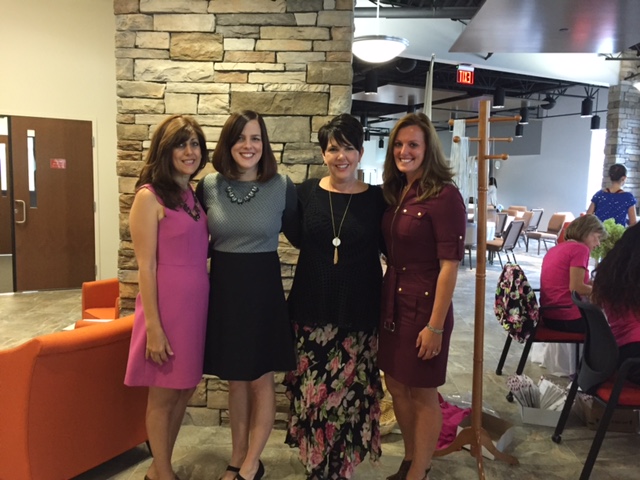 (From left to right) Jessica Landmon, founder of Women Get Real, spoke authentically about choosing faith over fear. Rachel Axtmann spoke compellingly about choosing submission as wife. Shila Anderson gave an irresistibly down to earth talk about triumphing over the scale (comparison as well as health).

Since I speak both as a ministry and for a living, you might think it’s strange that I’d down-play professional speakers, but this weekend reinforced some thoughts I’ve been having for a while.

I’ve been in your shoes, so I understand where you’re coming from. It’s easier to get women to come to an event when there’s a “name” on the ticket. In this world where there are so many things vying for your women’s time and celebrities make people sit up and take notice, I don’t think it’s a terrible thing to bring in a speaker who your women already know.

BUT don’t forget the importance of the stories around you. There are women right in your church who have something to share that will be life-changing for others. There’s less and less of a platform for these stories, but you can make a change. Start to see part of your calling as identifying and training up speakers. Give women a chance to share. Give them their first opportunity (even though they’re shaking in their shoes and stumbling over their words–everybody has to start somewhere!). You can easily weave these times together in an event with a well-known speaker:

You are a needed voice, and don’t forget it!

[Tweet “It doesn’t matter if no one knows your name. Your story matters. #TheProblemWithProfessionalSpeakers”]

Although women at the event responded to me, they lavished love and praise on their homegirls. And so they should! It takes boldness and courage to share your story where you live life. These are the same women who see you make mistakes and watch your children throw temper tantrums. 🙂 That’s what magnifies God, though. When we get to hear the God stories happening in our midst, it builds our faith.

Truthfully, I’m less nervous speaking in front of hundreds of strangers than when I speak at home, and I’ve spoken for over a decade now. I know you’ll be nervous, but it’s normal. Push through and tell your story for the glory of God. Don’t despise small beginnings. Every chance to speak will build your confidence in His ability to work through you.

We never want to get too polished. There is something about a heartfelt message that pierces people’s hearts. It doesn’t even matter if that message doesn’t have a brilliant sticky statement, clever scripture interpretation, or a well-crafted ending. It’s the heart behind the message that matters most.

I’ve got to be honest and tell you that I’m struggling a little here. I love having the opportunity to give the same message multiple times because it allows me to work through the kinks and improve it. However, it’s hard to maintain “heartfelt” after you’ve given a message a few times. What I’ll be praying for after observing the other speakers this weekend is to be able to deliver it every time as if it’s the first time. That I’ll feel the personal impact of the story as if I’d just lived it. That the new women in the room will make it all feel new. They deserve my fully-engaged heart every time, but only God can do that work. I can’t generate it or fake it.

Have you been part of an event recently where there was a blend of speakers? How was it? What did  you love most about the messages from the homegirls?